Furthermore, just as we in the West have also become conscious that God is not a quasi-personal force or telos informing or propelling the cosmos toward a particular end - a remnant of the anthropomorphic language and outworn creed of our forebears - it is also becoming apparent that "God" is a symbol - shorthand, abbreviation - for one particular structural possibility of the cosmos among others, and a possibility that includes us as integral parts of this structure. All possibilities are grounded ultimately in the promiscuously creative but blind cosmic process, as the source and ground of all reality. Within this process, everything exists in relation to everything else, in varying degrees of complexity and interdependence - and it is these complex relations that I am calling structures, in which objects stand in relation to each other. The structural possibility that the Judeo-Christian version calls "God", its concept of God, represents one highly idealized version, anticipation, or possible development among others of the process out of which we have emerged, some benign (and perhaps superior to the Christian version) and some much less so.

Although terms such as "ultimate reality", "ground of all reality", and "ultimate ontological context" [as used by prof. George Rupp, in Beyond Existentialism and Zen] implicitly but strongly suggest it, whether we can continue to speak of reality as one has increasingly become more complex and controversial. From our current perspective, it appears that God, the theological correlate of this inexorable but blind process, is an emergent, not static, ready-made reality. Second, not all regions of the cosmic process manifest that reality to the same degree. From what we can discern, there might be large regions of the cosmos where the reality of God is (and will remain) present only as a latent possibility, not actuality. Third, that "ground of all being" admits developments in different directions, not all necessarily compatible or benign, and developments that are not foreseeable or predetermined (e.g. by the "nature" of God).

Creativity, self-consciousness, personality, meaning, purpose, and humanity are (unforeseen) developments of this emergent reality, and to date these developments are, to the best of our knowledge, realized only in the region of the cosmos that we inhabit. Not surprisingly, and justifiably so, we attribute and reserve these qualities almost exclusively to "God". In us, if you will, God has become conscious of God's self; in us, humanity and personhood have entered the cosmic process; and in us, diverse as we are, different and still future characteristics or dimensions of God have yet to be realized. We are implicated in the future of these developments, as active participants in and contributors to the cosmic drama unfolding in and through us, and we, like our ultimate ground, participate in all of its ambiguous potential for good or ill. We have become conscious only recently of our role as world-makers (to borrow Nelson Goodman's phrase); now is our turn to become conscious of much more than that: of our role as God-makers.

Insofar as the being of God is inextricably related to ourselves, any alteration that we bring about in ourselves and our "world" is ipso facto an alteration in the very being of God, in the very fabric of ultimate reality. God is a function of the human and the world, and conversely. Through human action the cosmos is being completed and brought into conformity with a structural relation or possibility. But there is also here a reciprocal movement and influence: from the ideal, which enshrines that possibility, to the human who creates it. The idea of God, a free creation of the human imagination (Kaufman, on my reading), in turn shapes and determines its creator. Through the idea of God we lift ourselves and the cosmic process, as it where, by our bootstraps, into conformity with a possibility, an ideal, which is, strictly speaking, of our making.

(from Rupp in Perspective: An Examination of Two Topics in Beyond Existentialism and Zen, New York 1979, by Daniel R. Alvarez, in Philosophy East and West, volume 55, number 2) 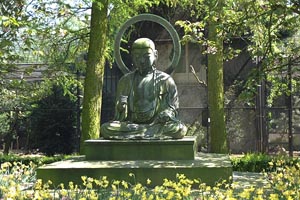